Some of you may remember my post about Quantum Mechanix selling BSG Character Dog Tags for USD$49.95 (see post HERE). I ordered the Chief Tyrol dog tags and they arrived yesterday.

The first photo is of Chief Tyrol's dog tags. Aaron brought them with him to the WOLF G1 con and let me wear them for the weekend. While I had them, I took a photo of them. The second photo is what I received from Quantum Mechanix. 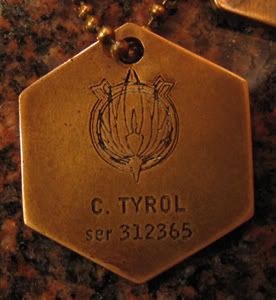 The serial number is completely different.
I emailed them to ask what was going on and the director of Quantum Mechanix replied ...

So it's not their fault the serial number is wrong because it was the info they were sent by the Studio. But is it wrong? Maybe they made new dog tags for the Chief with the correct "G. Tyrol" listing and changed the serial number. I've asked Aaron to double check the Chief's dog tags for me. He's not at work this week but he will check them for me next week when he's back at work. I'll let you know once I hear back from him.

Oh, and ignore that it says "C. Tyrol" on Aaron's dog tags. These dog tags were made before it was revealed on the show that the Chief's first name was Galen. It's not the only stuff up, Helo's dog tags read "J. Helo". I guess that's before they decided his first name was Karl. And technically it should read "K. Agathon" not his call sign.


UPDATE: Aaron has confirmed that the serial number on Chief Tyrol's Dog Tags is 409185
http://community.livejournal.com/aarondouglas/45310.html